The 2022 NTT IndyCar Series season had a little bit of everything. There was a new first-time winner, a photo finish at Texas, heartbreak in the Indianapolis 500, an emotional win for Alexander Rossi, and plenty of drama on and off the track. This has already been the wildest Silly Season in history, and while the two biggest pieces of the puzzle fell into place yesterday, there are still a ton of items to sort out before next season.

Team Penske once again shined as their three-car effort racked up nine of the 11 wins for Chevrolet, who won the Manufacturer’s Championship for the first time since 2017. Josef Newgarden contributed a season-high five wins to that total but still came up just shy of winning his third title. Scott McLaughlin earned three victories in his second season and Will Power claimed his second title despite winning just one race. That hadn’t happened since Tony Stewart won the IRL championship in1997, which was comprised of just ten races.

It was another Penske vs Ganassi battle for the championship, as the two powerhouse organizations went head-to-head for the tenth consecutive season. A driver from one of those two teams has won the championship in 14 of the last 15 years. Ganassi didn’t come away empty-handed though, as Marcus Ericsson delivered Chip Ganassi his first Indy 500 win in a decade, and fifth overall. It was obviously the biggest win in Ericsson’s career, as he battled for the championship all the way to the final race.

Records were broken by two legends of the sport. Will Power tied, then broke Mario Andretti’s all-time poles record while Scott Dixon passed Mario for 2nd on the all-time wins list. Dixon also set the fastest pole qualifying speed at Indianapolis. We saw significant growth within the paddock this year, with more to come. Paretta Autosport returned to the grid in a new relationship with Ed Carpenter Racing and Juncos Hollinger Racing is expanding to two full-time cars next year. Arrow McLaren SP is adding a third car for Rossi and Dale Coyne Racing may field a third car as well.

Rookies were a major storyline once again this season, as there was an impressive group ready to challenge the veterans of the sport. Christian Lundgaard came away with the Rookie of the Year honors but David Malukas, Callum Ilott, Kyle Kirkwood, and Devlin DeFrancesco certainly gave fans plenty to look forward to in the coming years.

With the final chapter complete, the book on the 2022 season is officially written. It is time to look back at some of the amazing moments that took place over the course of 17 races.

Shoutout to everyone who made the 2022 INDYCAR season a success. 👊 pic.twitter.com/J7RUpmoRzy

This award typically goes to the team that won the championship, and that is the case once again this year. There is much more to Team Penske though than Power’s drive to a second title. All three cars were the class of the field this season, with Newgarden finishing 2nd in points while scoring a series-leading five race wins. McLaughlin took a massive step in his sophomore season, earning three race wins, three poles, and seven podium finishes on his way to a 4th place spot in the championship. Had they performed better in May at Indy, it would have been a flawless season for The Captain.

After adding a third car with Jack Harvey, this was supposed to be a better year for the Rahal Letterman Lanigan team. Instead, it felt like more of a step backward. Harvey was nowhere to be found with just one top 12 finish (10th at Nashville) and never led a lap all season. This is the fifth consecutive year that Graham Rahal failed to win a race, and his first full-time season without a podium finish. The lone bright spot was the rookie, Lundgaard. Expectations may have been a bit high going in, but this team realizes they failed to deliver, and will likely be much better next season with the addition of Stefano Sordo.

There were several candidates to choose from for this dubious award, but none had the expectations that Romain Grosjean did coming into the season. After a brilliant rookie campaign at Dale Coyne Racing, the former Formula One driver took over a championship-level car at Andretti, only to come up empty. Grosjean finished 13th in the standings with just three top-five finishes. He actually finished outside of the top 15 in more than half (nine) of the 17 races. The Frenchman led a total of three laps all season and crashed out of his maiden Indy 500. It was a rough sophomore slump for the driver of the No. 28 Honda, who will aim to do better in 2023.

The racing at Texas was sensational, and likely has the series returning to the track next season. Just when it looked as though McLaughlin was about to sweep the first two races of the season, his teammate had other ideas. Newgarden closed in on him in the closing laps, snatching the victory coming to the finish line.

Newgarden was in another stratosphere at Iowa, leading 208 of the 250 laps. He pounced at the start of the race and never looked back. To say that Newgarden has owned Iowa Speedway would be a massive understatement. Following Saturday’s race, his last nine finishes at the track were 2nd, 2nd, 1st, 6th, 4th, 1st, 5th, 1st, and 1st. He has led 1,506 laps in his last nine starts at Iowa. The only other drivers to lead at least 100 laps in that same time span are Helio Castroneves (267) and Power (202), also with Team Penske. 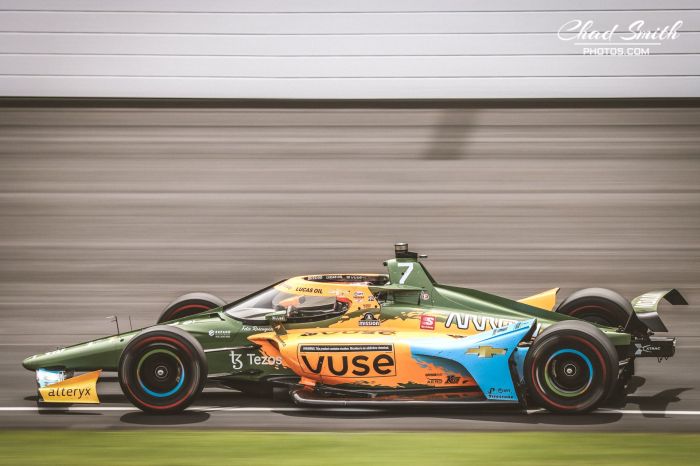 Power and McLaughlin would be easy choices here, but they drive for the top team in the series and are expected to win. The best feel-good turnaround story revolves around Felix Rosenqvist. After a brutal 2021 campaign, the Swede was just hoping to remain in the series after rumors began that he would be kicked to the curb by McLaren. His performance this season had several teams itching to sign him if he became available but the team wisely picked up his option yesterday. Felix earned two poles this season and recorded nine top-ten finishes, including a podium at Toronto. He finished 9th in the standings this year after ranking 21st in 2021. Rosenqvist proved that 2021 was just a fluke and that he is capable of contending for race wins every weekend.

With the last lap pass at Texas for the win being the easy choice here, there is another worthy candidate for this award. Rinus VeeKay pulled off an incredible move as Dixon and Newgarden battled for position in front of him. The Ed Carpenter Racing driver went for the unconventional pass around the outside of Turn 6, swinging past both of the title contenders with one strong move.

WHAT A SAVE by @ColtonHerta! #INDYCAR

Herta openly admits that lady luck was certainly on his side for this one, but his quick hands surely helped as well. It was an incredible recovery, and an awesome video to look back on.

#INDYCAR history lives on the Streets of Toronto.

There were so many incredible moments in the 2022 season. McLaughlin earned his first career victory in the season-opening race and barrel-rolled in victory lane. Rossi broke his winless drought and was able to celebrate one more race win with the Andretti team. Dixon set the pole speed record at Indianapolis and of course his teammate Marcus Ericsson earned the ultimate prize on Memorial Day Weekend. The return to Canada was a refreshing and much-needed event. Many people questioned if the series would ever return, but for the first time in three years, they made it happen.

Scott Dixon — who led almost half the race — got a pit lane speeding violation and is now out of contention.

It would be difficult to find a bigger gut punch for any driver, than what Dixon experienced in May. After leading 95 laps and dominating the race, Dixon made his way onto pit road for his final stop of the race. The six-time champion exceeded the pit lane speed limit by 1 mph and was penalized. A second Indy 500 victory, and ultimately, a record-tying seventh championship disappeared in the blink of an eye.

At Penske, we care about details. https://t.co/UNunNu5jgJ

Newgarden has always had a great sense of humor. A quick YouTube search for “Newgarden incognito” will bring back some fond memories of when the driver was not so well known. Even with a quick tweet to call out another driver, Josef can provide plenty of laughs. 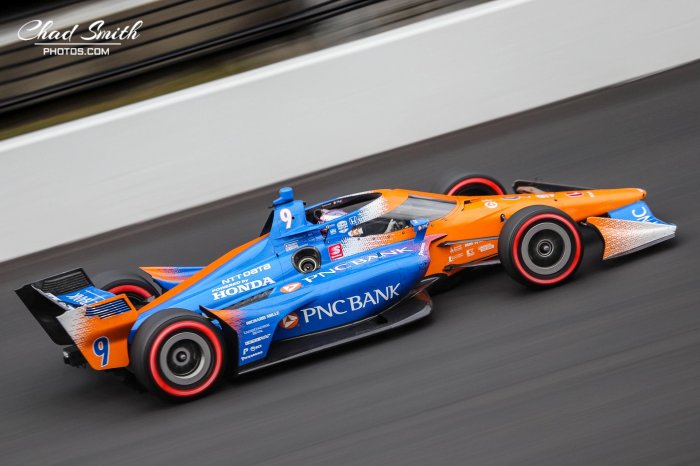 This should surprise no one. Dixon has been the model of consistency for more than a decade. Most of the six championships that he has won can be attributed to his smooth and steady approach, and just taking a podium or top-five finish instead of pushing the envelope and going for the win. Going into the season finale at Laguna Seca, the only finish outside of the top-ten for Dixon was the Indy 500, which he would have won had it not been for the speeding penalty. His 6.7 average finishing position was second only to the eventual champion.

This may have been the most difficult choice to make of all the awards. This quickly turned into a two-horse race between Lundgaard and Malukas. Lundgaard may have won the official Rookie of the Year honors, but Malukas gets the slight edge in this one. Both had a runner-up finish this year and they had similar results at Indianapolis (16th and 18th) but many believe that Malukas should have been awarded ROY over Jimmie Johnson. You can’t go wrong with either of these guys, which says a lot considering the talented pool of rookie drivers.

When it comes to design ideas, it’s tough to beat using the Astor Cup championship trophy as the ultimate flex. The chrome finish with the blue NTT Data colors really made this lid pop at Indianapolis.

Outside of the traditional liveries that were seen on most race weekends, a few stood out from the pack. The all-orange Bitnile machine that VeeKay drove on a few occasions was great. The Freightliner livery on McLaughlin’s car was a great color combination. Rahal’s green iPacket livery at Gateway was also exceptional, as it really popped under the lights. One of their team’s sponsors, HyVee, hit a home run in sponsoring the event weekend at Iowa Speedway. It was more like a grand slam, which is how I felt about the HyVee livery on Harvey’s Honda. Sometimes the most simple design is the best approach.

There were not as many new liveries at Indianapolis this year. The Arrow McLaren SP team had quite a different look on their three machines, but none were great. Newgarden’s gold and white Shell livery was nice but his teammate Power had a lot going on with the mix of colors on his Chevrolet. Ed Carpenter had an odd color combination on his No. 33 entry and Marco Andretti certainly had a better-looking car this year than he did last May.

In the end, the revised American Legion livery on Tony Kanaan’s rocket was absolutely stunning. With much less blue on the midsection and the bright red rings around the wheels, this car would really pop in the sunlight. Their “Be The One” slogan was a nice touch to go with the car number. It also didn’t hurt that this was one of the fastest cars all month.

Congratulations to Power and the entire Team Penske organization on their 17th championship season.