NASCAR released their 2022 schedule today, with several changes in store for next season. The series is moving the season-opening exhibition race known as “The Clash” to Los Angeles, where they will race on a quarter-mile paved track inside the LA Memorial Coliseum. The race will be held on February 6, one week before the Super Bowl and two weeks before the Daytona 500.

The Clash will take place in February on a purpose-built track inside the stadium that's hosted two Olympic Games, and will host a third in 2028. pic.twitter.com/IMgzgQnJhs

The series will head to Auto Club Speedway after Daytona, where they will race on the 2-mile track one final time before it is reconfigured into a high-banked short track. Circuit of the Americas returns on March 27 and the Bristol dirt race will take place on April 17. The All-Star race will be held at Texas Motor Speedway once again.

The Coca-Cola 600 at Charlotte will be held on May 29, which will follow the Indianapolis 500 on Memorial Day weekend. World Wide Technology Raceway at Gateway will join the Cup Series schedule next year on June 5. It will replace one of the two races at Pocono. Two more great events return as Nashville is slated for June 26 and Road America on Fourth of July weekend.

The series will head back to the road course at the Indianapolis Motor Speedway, which will again be a double-header event with INDYCAR racing the day before on July 30. For fans wanting to see Cup cars back on the famed 2.5-mile oval, that just might be on the horizon after next year.

IMS today will confirm that it will host a NASCAR-IndyCar doubleheader again next year, with NASCAR again on the road course.

However, IMS wants to begin talks on moving NASCAR back to the oval in the future.

The final regular-season race will once again be under the lights at Daytona on August 27. The three venues in the first round of the Playoffs are Darlington, Kansas, and the Bristol night race on pavement. The second round will be Texas, Talladega, and the Charlotte Roval. The final set of tracks to determine the championship four are Las Vegas, Homestead-Miami, and Martinsville. The season will conclude on November 6 at Phoenix Raceway. 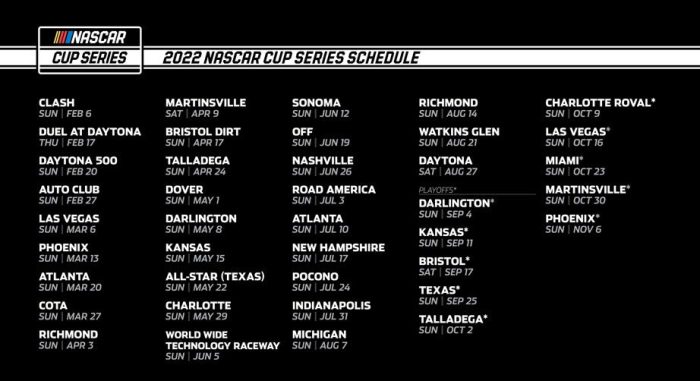