After the first 11 races of the 2021 season, Will Power was clearly in a slump. The Team Penske driver was winless and still had not earned a pole. Last week he finally grabbed that win on the Indianapolis Motor Speedway road course, and today he took care of the pole. Power has earned at least one pole in every season since 2008, and now the streak continues.

This is the 63rd career pole for the king of qualifying, just four behind tying the record of 67 set by Mario Andretti. Power’s two-lap average speed was 180.618 mph as Roger Penske’s team qualified three cars inside the top four. “Stoked, man, because every one I get gets me a little closer to that record. It’s going to be really tough to ever beat that, but if I didn’t get a pole this year, it pretty much was going to be impossible.” 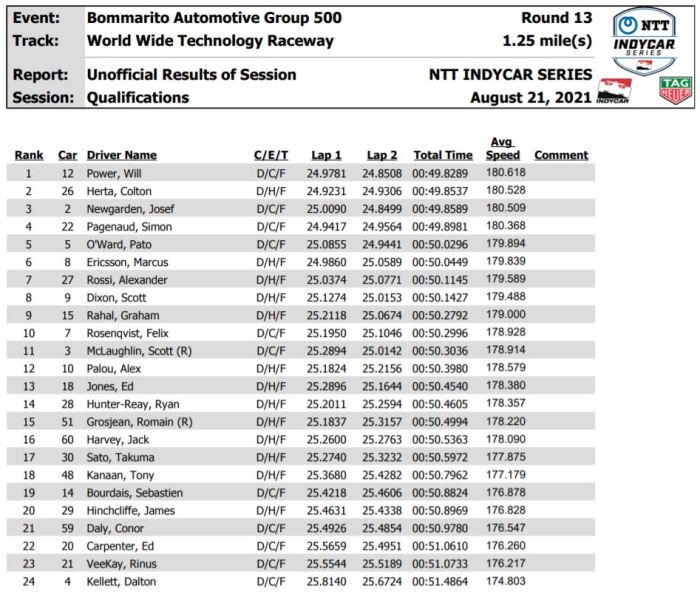 Joining Power on the front row and breaking up the Penske party is Colton Herta. Josef Newgarden and Simon Pagenaud will start on Row 2 with Pato O’Ward and Marcus Ericsson starting in Row 3. Alexander Rossi, Scott Dixon, Graham Rahal, and Felix Rosenqvist round out the top ten starters for tonight’s race. Alex Palou struggled in qualifying and will start 21st after a nin-grid penalty for an unapproved engine change.

After Palou’s championship lead was sliced by more than half because of the blown engine on the IMS road course last week, O’Ward feels like now is his opportunity to pounce. “It was very unfortunate for him, but he hasn’t had bad luck at any point in the season – we have,” O’Ward said. “In racing, it doesn’t exist to have good luck in every single race. That doesn’t exist.” O’Ward likes how the rest of the schedule shapes up for him. The Arrow McLaren SP driver finished third and second here last year, and he swept the Indy Lights doubleheader in 2018 at Portland. Also, he has raced at Long Beach in IndyCar while Palou has not.

This event marks the oval-track debut for Romain Grosjean, who qualified 15th in his No. 51 Chevrolet. The ten-year veteran in Formula One said that he felt comfortable during his test at the track last month. “I want to see how it’s going,” Grosjean said of oval racing. “Everyone in IndyCar seems to be enjoying ovals. I still prefer road courses because I like braking late. But I’m looking forward to it and seeing what we can get out of it. There is not much room for mistake, and that’s something you need to keep in mind rather than just trying to go all out straight away.”

The former @F1 driver is feeling speedy ahead of his oval racing debut. #INDYCAR pic.twitter.com/x5ESha9Nap

Both Tony Kanaan and Ed Carpenter will be making their fourth and final start of the season tonight. Kanan (starting 18th) has been consistent this season, finishing 11th, 15th, and 11th respectively. Carpenter (starting 22nd) has improved every race this season, finishing 17th and 11th at Texas, then qualifying 4th and finishing 5th in the Indianapolis 500 in May. Conor Daly will occupy that car for the final three events of the season but slides over to the No. 59 Chevrolet for Carlin Racing tonight, subbing for Max Chilton and starting 21st.

The race distance is 260 laps, which is 325 miles around the 1.25-mile oval. Power and Sato earned the pole for last year’s double-header event, while Dixon and Newgarden won the two races.