Scott Dixon is at it again. The six-time series champion dominated Saturday’s race at Texas Motor Speedway to capture his first win of the season. It is Dixon’s fifth victory at Texas, career win number 51, and his 19th consecutive IndyCar season with a victory. That record is now all his, after being tied with the legendary AJ Foyt. The win also gives Dixon the lead in the championship standings after three races. He is the only driver to finish inside the top five in all three races.

The numbers get even weirder when looking at his numbers at Texas. He has either won the race or crashed in his last seven starts at Texas. He is the all-time lap leader here in addition to having the most wins. Dixon led 206 of the 212 laps on Saturday, and also had the fastest leader lap at 23.7347 seconds. All of this spells trouble for the rest of the paddock as they do it all again in less than 24 hours from now. 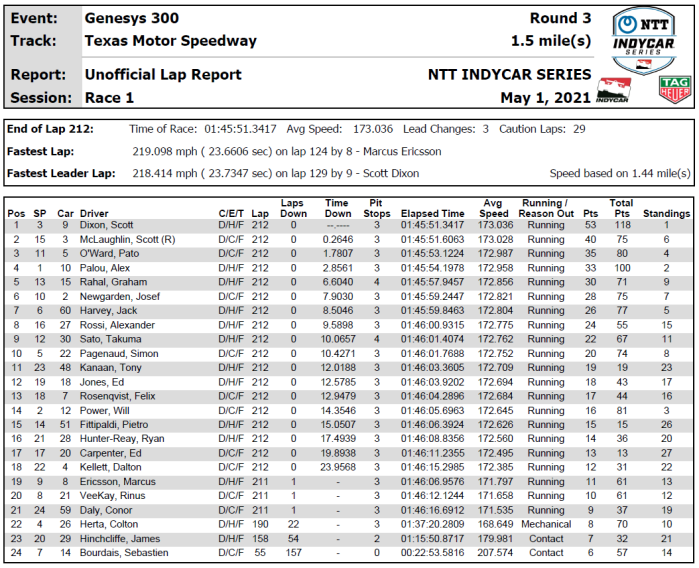 The day belonged to New Zealand as it was a 1-2 Kiwi finish. Rookie Scott McLaughlin earned his first career podium finish on Saturday in just his fourth start. The Team Penske driver started in 15th after qualifying was canceled earlier in the day. Pato O’Ward earned his first podium of the season and the fifth of his career. The Arrow McLaren SP driver rallied from an 11th place starting position.

Alex Palou started the race on pole, as the field was lined up according to entrant points. The winner of the season-opening race finished 4th after a solid, clean race. Graham Rahal rounded out the top five on Saturday, but it was far from easy. The RLL Racing driver had a close call with Jack Harvey late in the race that nearly took them both out. The series ruled that Harvey would not be penalized for the move, but Rahal believes the two have some things to discuss before tomorrow’s race.

“I have a lot of respect for Jack, but we need to have a man-to-man talk about that,” Rahal said. “He could see the run I had on him was tremendous and we were going to go by. You just don’t even risk anybody like that. So we need to have a discussion about it. We need to have a talk about it over the next 12 hours, and I think Race Control needs to, too, because how is that not penalized? Let’s face it, that’s what they teach us – you can’t move in reaction, and particularly at 225mph.”

Speaking of penalties, Josef Newgarden was given one after “unavoidable contact” with Sebastien Bourdais that sent him hard into the outside wall. Newgarden had a solid argument that drivers were checking up in front of him and he had no time to react. Series officials decided otherwise and penalized him. The Team Penske driver rebounded nicely to finish 6th on Saturday.

Bourdais had some help from Josef Newgarden.

Harvey finished the day with a solid 7th place finish for Meyer Shank Racing. The driver of the No. 60 Honda also had a moment with Alexander Rossi, forcing him into the grass near the start/finish line. Rossi finished in 8th to lead the way for Andretti Autosport, but also noted that he would need to have a talk with Jack as the two are somewhat teammates because of the technical alliance between the two teams. Takuma Sato had a quiet but decent run to finish 9th while Simon Pagenaud rounded out the top ten on Saturday.

Tony Kanaan’s season debut started out well as he was fastest in the practice session earlier in the day. Because there would be no qualifying, the Ganassi driver was forced to start 23rd. He sliced his way to the front and finished 11th in the No. 48 Honda. Several marquee names had rough outings, most notably Will Power. The Penske ace started on the front row but quickly faded. He finished a disappointing 14th on Saturday.

Ryan Hunter-Reay was a non-factor and finished 16th while Ed Carpenter’s season debut ended right where it started – in 17th position. Marcus Ericsson had a good run going until a mishap on pit road ruined his race. The Ganassi driver did manage to record the fastest lap of the race though. James Hinchcliffe lost control of his No. 29 Andretti machine after getting the air taken off the front of his car, sending him hard into the outside wall. Teammate Colton Herta also had trouble late in the race which relegated him to a 22nd place finish.

Yeppppp upright failed due to heat from the brake fire. https://t.co/eHotEWFGri

Teams and drivers will do it all over again tomorrow, at an even greater race distance. The starting lineup for the XPEL 375 at Texas will again be set by entrant points, which means Dixon will start on pole. NBC Sports Network will again provide coverage of the event, which begins at 5 PM ET on Sunday. 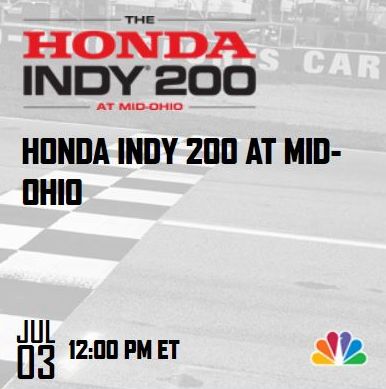