Following a successful return to the Pacific Northwest last year, the NTT IndyCar Series is back in Portland this weekend for the season’s penultimate race. The championship contenders were all near the top of the timesheets on Friday, but it was a familiar rookie that sat at the top. Colton Herta had the quickest time of the day at 57.4293 seconds.

Alexander Rossi was 2nd fastest today and sits 3rd in the championship standings, 40 points behind leader Josef Newgarden. Scott Dixon is 4rd in the standings and was 3rd fastest in practice. Newgarden was 4th in the combined practice and knows he is in a favorable position heading into these final two race weekends. 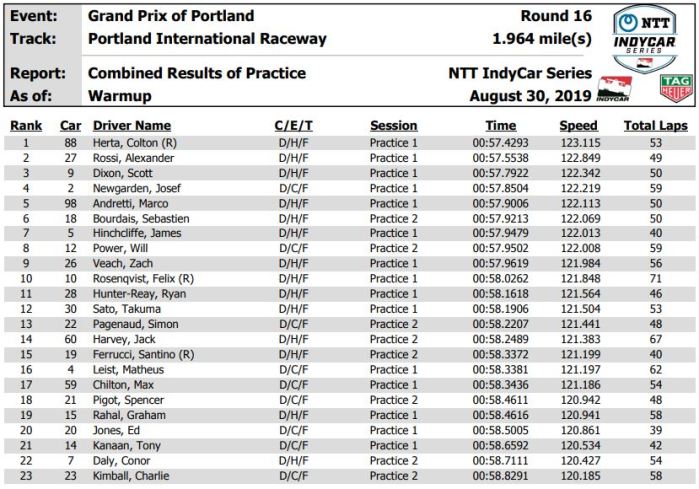 The Andretti Autosport team tested at Portland two weeks ago, which they hope will give them an advantage this weekend. All four drivers were inside the top 11 on Friday, with Marco Andretti 5th fastest. Herta, who was fastest, is essentially part of the Andretti program as well. Ryan Hunter-Reay was surprisingly the slowest of the group, and has only won two races since the 2015 Pocono event. He has two podiums this year, but is hungry for another victory.

Sebastien Bourdais had the fastest lap in the afternoon practice session and finished 6th overall on Friday. Unfortunately, the Frenchman got off course at the end of the session and went into the tire barriers. Dating back to his days in CART, Bourdais has finished on the podium at Portland five races in a row, including two wins.

James Hinchcliffe has had a quiet season but hopes to put an end to that this weekend. The popular Canadian has a new but familiar teammate this weekend in Conor Daly, who is filling in for Marcus Ericsson who is at Spa for the Formula One weekend. Will Power was just behind Hinchcliffe in 8th, with Zach Veach and Felix Rosenqvist rounding out the top ten.

It wasn’t the best day for Rahal Letterman Lanigan Racing, as last week’s winner Takuma Sato was 12th fastest, and Graham Rahal was 19th on the combined chart. Sato did win this race last year, and would love nothing more than to make it two in a row here and on the season. Simon Pagenaud was 13th overall today, but you can expect him to be in the thick of things tomorrow and on Sunday. He trails his Penske teammate by just 38 points.

There will be one final 45-minute practice session tomorrow at 2 PM ET, followed by qualifying for the Grand Prix of Portland, which begins at 6 PM. NBC Sports Network will provide live coverage of qualifications.