Spring Training officially gets underway for the NTT IndyCar Series at Circuit of the Americas for two full days of testing. In all, 25 cars will venture out onto the 20-turn, 3.4-mile circuit in Austin, Texas to prepare for the 2019 season.

The March 24 race at COTA will provide plenty of challenges for drivers and teams alike. The steep uphill run into Turn 1 is sure to be a tricky spot, especially on restarts. The course is littered with tight hairpins, fast straights, and complex corners throughout. Graham Rahal noted that there will likely be significant tire degradation, so giving the teams and drivers two full days of testing will prove to be very important in advance of race weekend.

Track time will be especially vital to the drivers, whom have not raced at COTA before. It won’t be long before they return though, as it is the second race on the schedule, two weeks following the season-opening race at St Petersburg.

Tuesday’s test features free admission for those who already have tickets for the race. For those not attending the race, there is a $20 entry fee to watch the test. Those that are not in the area can watch a livestream of the two test sessions, via IndyCar’s social media platforms. Tuesday’s test sessions are from 11-1 PM ET and 3:30-6 PM ET, and although Wednesday’s test will not be streamed, IndyCar.com will have live timing and scoring available.

Colton Herta had the fastest lap of the opening session on Tuesday, pacing at 1 minute 48.7443 seconds on his final lap. Two other candidates for Rookie of the Year this season are Felix Rosenqvist with Chip Ganassi Racing, and Marcus Ericsson with Arrow Schmidt Peterson Motorsports. Both Swedish drivers obviously have an impressive pedigree, but will need to quickly adapt to the Dallara IndyCar package.

In the opening test session on Tuesday, Rosenqvist was carrying a special mounted camera on his No. 10 car that Marshall Pruett elaborated on. Pruett stated that it was a 3D “ball” camera system that utilizes an array of GoPro Heros. The footage will be used for a wide-reaching advertising campaign by NTT to promote their involvement in the series.

In addition to most of the full-time drivers, there were several part-time drivers that took part on Tuesday, including Jack Harvey (Meyer Shank Racing) and Ed Jones (Ed Carpenter Racing). Fan favorite Helio Castroneves was behind the wheel of his bright yellow Pennzoil machine with Team Penske. RC Enerson was driving the No. 23 Chevrolet for Carlin, and Kyle Kaiser was on hand with Juncos Racing. The team announced yesterday that Kaiser would drive the No. 32 car for the March 24 race at COTA, but they had clutch problems that prevented them from making laps this morning.

Music to our ears. #INDYCAR pic.twitter.com/J3Hdv1enbU

Nice start at @COTA! Always wanted to wheel something in anger around this place. Really fun track! Looking forward to our second session. #INDYCAR // @SPMIndyCar pic.twitter.com/np1kCGn8VZ

Herta led the afternoon session as well in his No. 88 Honda. “I’m super happy with how the day went,” he said. “We did some great things to the car and I’m very happy with how the boys got everything together in time for this test. Everyone did a fantastic job and there were no issues with the car; it was perfect. We kept chipping away and kept finding time. By the end of the day, we were quickest by quite a margin. I can’t wait for tomorrow now.”

Penske teammates Will Power and Castroneves were just behind Herta, with Ganassi’s duo of Rosenqvist and reigning series champ Scott Dixon rounding out the top five. The 25 drivers combined to turn 1,034 laps, with Castroneves leading the charge with 56 laps. Fortunately there were not any incidents to report on Tuesday. 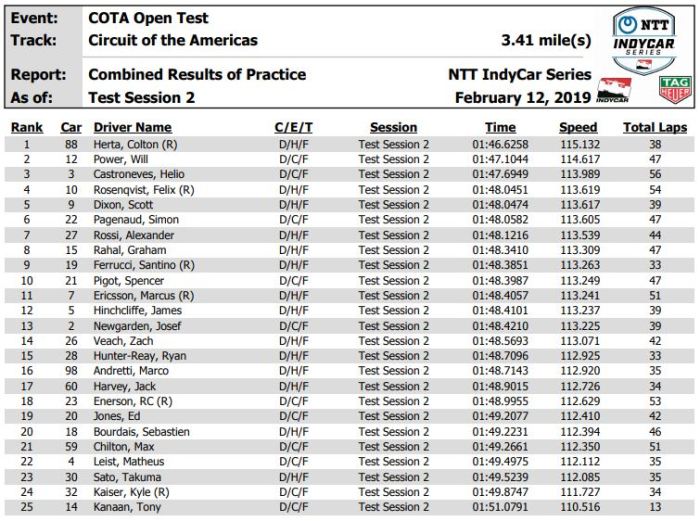 Andretti Autosport announced earlier in the day that they have agreed to a technical partnership with Harding-Steinbrenner Racing. Andretti will provide engineering and development support, including access to the same damper program that their team uses. The two entities had a previous alliance in the season-finale last year at Sonoma, where Patricio O’Ward qualified 5th and finished 9th in his IndyCar debut.

The Harding-Steinbrenner team will only field one car this year, after O’Ward parted ways with the team after learning that the team did not have a full-season budget for his ride. The reigning Indy Lights champ still has his $1 million prize money to offer to a team, with Juncos Racing and Carlin Racing as the most likely destinations.