The 2019 racing season began for many people last week, with the 33rd Annual Chili Bowl Nationals in Oklahoma. For everyone else, the season begins this week in Florida for the 57th running of the Rolex 24 at Daytona.

There are 47 entries in this year’s event, spread across four classes of competition: Daytona Prototype international (DPi), Le Mans Prototype 2 (LMP2), GT Le Mans (GTLM), and GT Daytona (GTD). This will be the first race with the entire field using Michelin tires, as part of a new multi-year partnership between the two.

The IMSA WeatherTech SportsCar Championship season-opener can be seen on NBC Sports. Qualifying on Thursday is on NBCSN from 3-5 PM ET. The NBC Sports App and IMSA Radio will also provide coverage during the event.

The network will utilize 17 of their IMSA, NASCAR, and IndyCar commentators, analysts, and reporters while providing 24-hour coverage from Daytona International Speedway. Leigh Diffey, Calvin Fish, and AJ Allmendinger will begin Saturday’s broadcast on NBCSN. See below for a full breakdown of assignments, platforms, and times. 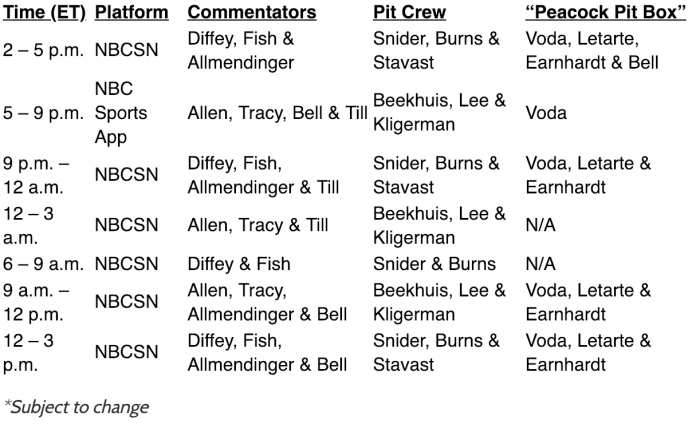 Andy Lally has the most Rolex 24 wins (five) in the field, and will be behind the wheel of the No. 44 Magnus Racing Lamborghini Huracán GT3 machine. Two are co-drivers in Christian Fittipaldi and Joao Barbosa, who will pilot the No. 5 Mustang Sampling Cadillac. The other is Juan Montoya, who will return to the No. 6 car with Simon Pagenaud and Dane Cameron. Helio Castroneves, Alexander Rossi, and Ricky Taylor will be in the No. 7 Team Penske Acura.

Chip Ganassi is no stranger to this event either. Ford Chip Ganassi Racing has the most Rolex 24 wins in the field with eight, including each of the past two years in the GTLM class. Though they have a different look this year, there is still a wealth of talent in their two-car lineup. Scott Dixon, Richard Westbrook, and Ryan Briscoe will share the No. 67 Ford, and Sebastien Bourdais, Joey Hand, and Dirk Mueller will drive the No. 66 sister car.

There is more IndyCar talent spread throughout the field. Colton Herta is part of the four-driver lineup for BMW Team RLL in the No. 25 car in GTLM. Juncos Racing will have both Kyle Kaiser and Rene Binder in the No. 50 Cadillac DPi car. Meyer Shank Racing will field four female drivers in their No. 57 Acura NSX GT3, three of which have IndyCar ties in Katherine Legge, Ana Beatriz, and Simona De Silvestro.

Time to kick off the sports car racing calendar with the biggest race of the year! The #Rolex24 featuring the @IMSA #WeatherTechChampionship gets underway Saturday, Jan. 26. Watch live on @NBCSN at 2pm ET. pic.twitter.com/zpJwKg2INl

Fernando Alonso is back with Jordan Taylor in the No. 10 Konica Minolta Cadillac DPi. The Spaniard will return to the Indy 500 this year with McLaren. It is not clear yet whether they will run two cars in May, or if they will have a partnership/technical alliance with an existing team. We do know that they will be utilizing Chevrolet engines.

Below are some links for the event:

The 57th running of the Rolex 24 was cut short as IMSA deemed the event official after 23 hours and 50 minutes. Wayne Taylor Racing’s No. 10 Konica Minolta DPi Cadillac driven by Fernando Alonso, Jordan Taylor, Renger van der Zande, and Kamui Kobayashi took the overall win, their second Rolex 24 win in the last three years. The extreme rainfall led to some of the most dangerous weather conditions the race has ever endured.

The heavy downpour started early Sunday morning, and never let up. There were a number of caution periods throughout the morning, and there were two red flags for the first time in the long history of the event. Cars were spinning and sliding off the course as many drivers questioned the decision to keep racing. Just four minutes before the final caution came out, Alonso made a pass for the lead as Felipe Nasr went wide in Turn 1 in the No. 31 Whelen Engineering Cadillac. Six minutes later, the red flag was displayed and the race was ended.

Click Here for Full Results of the Rolex 24 at Daytona

The No. 31 Whelen Engineering machine finished 2nd, while Team Penske was 3rd in the No. 7 Acura DPi driven by Helio Castroneves, Alexander Rossi, and Ricky Taylor. Their No. 6 sister car driven by Juan Montoya, Simon Pagenaud, and Dane Cameron was in line for a podium until the final few hours, when an oil pump failure ruined their chances.

Colton Herta, Connor De Phillippi, Augusto Farfus, and Philipp Eng captured the class win in GTLM for Bobby Rahal’s team. The No. 25 Team RLL BMW M8 GTE took the lead just one lap before the final caution came out. Sebastian Saavedra was part of the No. 18 DragonSpeed ORECA team that won the LMP2 class.

So proud of this group and everyone who contributed to our success.

It wasn’t a great weekend for Chip Ganassi’s team, as both cars in GTLM had setbacks. With multiple issues plaguing them, the No. 67 Ford GT with Scott Dixon, Ryan Briscoe, and Richard Westbrook finished 4th in class after having to stop for fuel late. The No. 66 sister car driven by Sebastien Bourdais, Joey Hand, and Dirk Mueller finished in 7th place.

The next event for the IMSA WeatherTech Sportscar Championship Series is the 12 Hours of Sebring on March 16.