The Mazda Road to Indy Presented by Cooper Tires will begin preparations for the upcoming 2018 season this weekend, with the seventh annual Chris Griffis Memorial Test on the road course at the Indianapolis Motor Speedway.

At least 40 drivers representing more than 16 nations and 11 different teams will take part in the two-day test at the speedway. The highlight of the weekend will be the first public opportunity to see the new Mazda-powered Tatuus PM-18 chassis for the Pro Mazda series. Live timing of all sessions will be available on the series’ respective websites – indylights.com, promazda.com and usf2000.com – as well as on indycar.com and the Road To Indy TV App.

Seven Indy Lights veterans are included among the entry list, headed by Colton Herta and Nico Jamin. Herta and former USF2000 champion Jamin won five races between them as rookies en route to finishing third and seventh, respectively, in the championship this past season. Herta will return for a second year with Andretti-Steinbrenner Racing.

Below is the full entry list for this weekend. 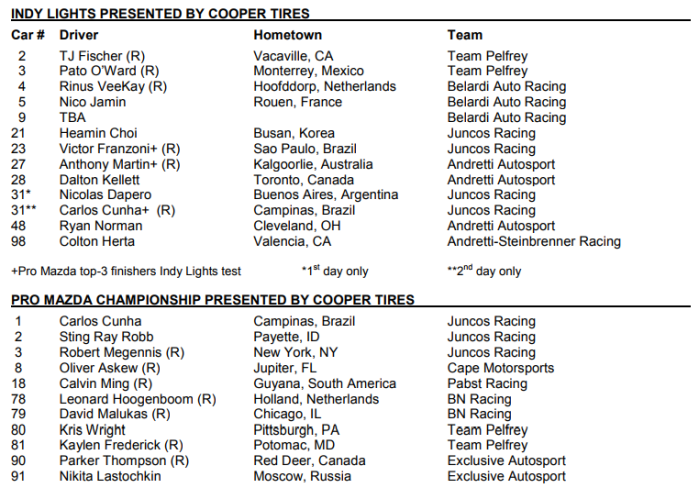 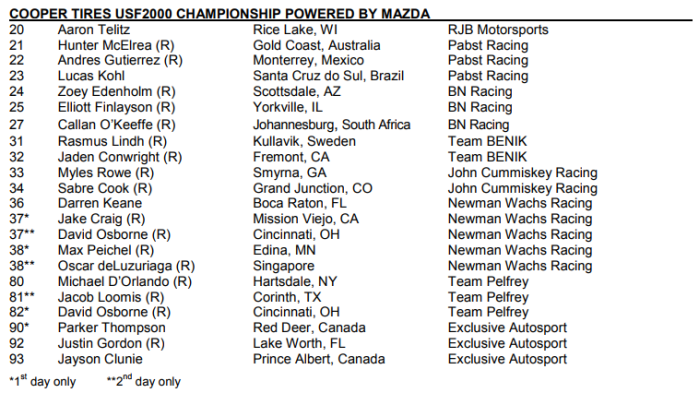 Earlier this week, the series announced their 2018 schedules, which include all three MRTI levels concluding their seasons with doubleheader race weekends at Portland International Raceway. Pro Mazda and USF2000 will also make a return to Lucas Oil Raceway on the same race weekend as the 102nd running of the Indianapolis 500.

Pro Mazda is utilizing the much anticipated Tatuus PM-18 chassis, and will have 16 races next season. USF2000 will feature 14 races in 2018, while Indy Lights has a 17-race schedule split over ten weekends, highlighted by the Freedom 100 at IMS on May 25. All three MRTI oval events in Indianapolis will offer additional points and prize money in 2018.

The MRTI series awards scholarships to the season champions in each racing category to assist them in moving up the stepladder, with the Verizon IndyCar Series as the eventual destination. With the new PM-18 being introduced in 2018, all MRTI series will have seen new chassis integrated since 2015.

Spring Training for the series will take place at Homestead-Miami Speedway on February 23-26.