The fourth stop on the 2017 Verizon IndyCar Series schedule is Phoenix International Raceway. That is also the site where teams and drivers will gather this Friday and Saturday as part of the “Prix View” Open Test.

There are 21 cars entered in the two-day test on the 1-mile oval in Avondale, Arizona. There have been 62 IndyCar races at Phoenix since 1964, but last year’s event was the first since 2005. Scott Dixon won that race last season, in what was his 40th career victory. The full entry list for the Open Test is displayed below. 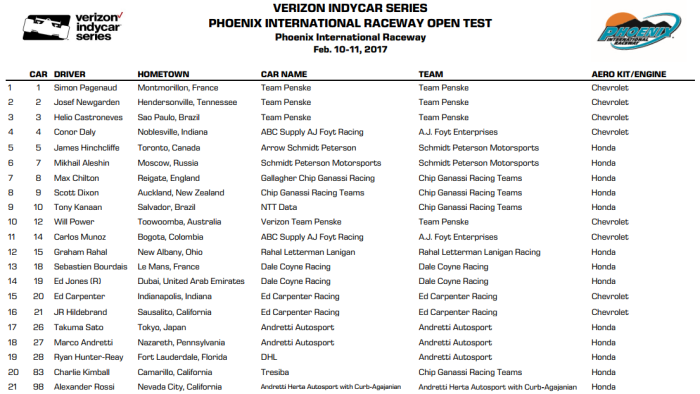 This will mark the first public appearance for Ganassi’s team since their move to Honda. There will be plenty of drivers working with their new teams. Those would be Josef Newgarden at Penske, Carlos Munoz and Conor Daly at Foyt, Sebastien Bourdais at Coyne, and Takuma Sato at Andretti. Ed Jones in the lone Rookie in the series this season.

Bill Pappas, IndyCar VP of Competition and Race Engineering, told Motorsport.com that because of the aero kit freeze for 2017, there are no plans to alter the downforce levels at Phoenix. Chevrolet appeared to have a strong advantage in the race last year. Pappas believes the race will be different this time around though, citing different tire compounds, engine gains, and other changes amongst the teams and drivers.

Test sessions run from 3-6 and 8-11 PM ET on both days. Saturday is free to the public, with a driver autograph session scheduled between the two practices. IndyCar will have live video streaming of all practice sessions online at racecontrol.indycar.com. The Phoenix Grand Prix is April 29, the last stop before the Month of May at Indianapolis.