For many people, the 2016 racing season begins this weekend in Daytona Beach, Florida. The 54th running of the Rolex 24 at Daytona is at the end of the month (January 30, 31) but the Roar Before The 24 kicks off tomorrow. The three-day testing session at Daytona International Speedway will feature top driving talent from all over the world, with a lineup of 54 cars.

The IMSA WeatherTech SportsCar Championship gets an added dose of drivers for this event, which has many familiar names from the Verizon IndyCar Series. Below is a list of IndyCar drivers that will be participating this year: 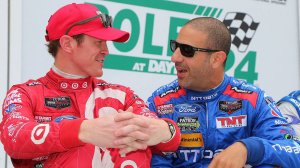 Chip Ganassi’s No. 02 car will once again consist of Scott Dixon, Tony Kanaan, and NASCAR drivers Kyle Larson, and Jamie McMurray. They aim to defend their title after winning last year’s Rolex 24 in the Ford Prototype. From 2006 – 2015, the FCGR team has an impressive six wins, and two runner-up finishes. Ganassi is the only team owner in history to win three straight Rolex 24 at Daytona events (2006-2008). Chip feels good about his crew heading into Daytona: “We’re proud to have the defending Prototype Champions from last year, along with the excitement worldwide with the reintroduction of the Ford GT. I think we’ve built a very strong effort for the 2016 race in the Prototype class, which gives us two more solid chances to get to victory lane.”

Former Ganassi driver Ryan Briscoe will be behind the wheel of the all-new No. 67 Ford GT. Frenchman Sebastien Bourdais comes over to the Ganassi squad, after finishing in second place last year in the Rolex 24. The two Ganassi Ford GT cars will be using the 66 and 67 numbers, representing Ford’s landmark Le Mans victories. Richard Westbrook and Stefan Mücke team up with Briscoe, while Joey Hand and Dirk Müller join Bourdais in the 66 car.

In a recent article from David Malsher, Jimmy Vasser told Motorsport.com that the KV team will field just one entry in IndyCar this season. As a result of the downsize, the team was forced to release three key members from last year’s team, including well-known engineer Bill Pappas. While a contract hasn’t yet been signed, Bourdais is working with the team to see if they can afford to make it a two-year deal for the veteran driver.

IndyCar champion and Indy 500 winner Ryan Hunter-Reay will be driving the No. 90 Visit Florida Racing Corvette, while Graham Rahal makes his return this year in the No. 100 BMW Team RLL Z4 in GT Le Mans. Townsend Bell finds himself in another ride this year, driving a Lamborghini Huracán GT3 for O’Gara Motorsport in the GT Daytona class.

Veteran driver Scott Pruett is now with Action Express Racing, in the No. 5 Corvette DP. If they find their way to victory lane in the Rolex 24, he would become the only driver to win the race six times (tied with Hurley Haywood for most all-time wins with five overall). Pruett has led the most laps of any active driver (337 more than second place Juan Montoya). With another win, Dixon would join Montoya, Memo Rojas, Derek Bell, Andy Wallace Brian Redman, and Butch Leitzinger as three-time winners of the race (overall wins).

The Roar Before the 24 will feature eight practice rounds around the 3.56 mile, 12-turn circuit at Daytona International Speedway, beginning at 9 AM ET each day. There is still time to purchase tickets to the event this weekend. Live Timing & Scoring  from every on-track session this weekend will be available on IMSA.com. Below is a recap of the 2015 Rolex 24 race.