Today was practice for the Verizon IndyCar Series, on the challenging IMS road course. Teams and drivers were preparing for the Angie’s List Grand Prix of Indianapolis, which takes place this Saturday. The 25 drivers entered in the race all got practice time today, with Scott Dixon leading the way, with a fast lap of 1:10.6971 around the 2.439 mile course.

Will Power, Juan Montoya, Sebastien Bourdais, Helio Castroneves, and Simon Pagenaud all finished in the 1:10 bracket. The top seven spots, and 11 of the top 13 all belonged to Chevrolet.

“It’s always a lot of fun when you’re at Indianapolis, road course or oval. I think this track a lot different from the other ones because you trim out (shed downforce) so much,” said Dixon. “It can be frustrating at times trying to piece a lap together, but I think when you do, it’s rewarding. I think all of us have been off-track testing the limits.”

There were a total of 1,513 laps turned during practice on Thursday, but not all of them were clean. Many drivers, especially early in the first practice session, locked up the tires and slid off course entering Turn 1. That was a theme for much of the day, as drivers were trying to figure out the timing for braking.

Juan Montoya and Sefano Coletti made contact with each other with about 30 minutes remaining in the second practice session. There was minor damage to both cars, but the impact was fairly heavy. These two drivers also had some interaction in the last IndyCar race at Barber Motorsports Park. 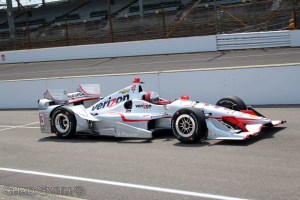 There were a couple of other things that happened today that are worth mentioning. The race Saturday will mark the 300th start for Castroneves, and the team has creativly added some smaller zeros to the number on his rear wheel guards.

Also, Justin Wilson and Tony Kanaan both had the LED display lights on their cars today, which shows the running position of the car. Shooting photos on pit lane, Turns 1, 2, 3, 7, and 8 today, I was able to see the numbers clearly, even in direct sunlight with the cars at full speed. Marshall Pruett reported that IndyCar will implement the LED panels on every car, starting with this weekend’s race is everything is ready. If not, they will make their debut during the Indy 500 in a couple of weeks.

Qualifications for the Angie’s List Grand Prix of Indianapolis begin at 3 PM tomorrow. IndyCar will have live coverage streaming on their YouTube channel. Before that, there will be one final 45-minute practice session at 11 AM.

Here are some highlights from today’s action, courtesy of IndyCar.

Below are some of my photos from Thursday. (Special thanks to IndyCar and IMS)